On this page we present the 2011 set of projects dealing with construction of our visual systems. The specific sound system was built in 2010. Both should be relatively easily transportable, not very power-hungry and cheap to make. Sound system will be presented elsewhere.

A visual system was discussed and the decisions went in two by two directions:

1. Refurbished LCD video projectors – instead of costly projector lamps the newest very powerfull LEDs would be used. 1000 lumen Cree leds (3.4 V at 3 A ) were ordered and 12 V / 90 W power supplies to accomodate three LEDs in series for 3000 lumens of white light. The idea is to use LEDs for a portable heavy duty projector. The number of LEDs could be increased. The LEDs are mounted on appropriate heat sink – together with constant current source for 3A – it all got too hot so the current source switched off. With a small ventillator attached at the back all is  ok – the projector’s own ventillation is also ok. The light of such system on its own is very powerful.

The work on one of the LCD projectors was just relatively ok (the colors were rendered well after the prism system in the projector was removed), but the brightness is very poor because of the very wide angle of LED dispersion. The resulting light from projector is very low.  A large focusing lense (or small individual LED reflectors) would probably do the trick. I bought a cheap LED hand lamp with three plastic reflectors which should do the trick.

2. Various types of laser projectors – they are very far-reaching sources of light – yet lightweight and economic in electric power. Some would be controlled by arduino microcontrollers – another recent artists’ area of work.

Along above two decisions/ dimensions some more directions appear:

3. To use the light sources in a default universalistic manner: as projectors of scanlined grafics – left to right & up to down – the  scanline (square) logic. This might not be economic with lower power lasers, since the fast line scan is very thin.

4. To use the light sources in a seemingly retro manner – using the direct XY laser deflection of mirrors, and in the case of lcd projectors and light sources – to use mirrors, prisms and lenses for a kind of mechanical graphics. A kind of reflector for video projector was built for another purpose but along the same lines. The small mirrors are attached to rubber and a loudspeaker behind expands the reflected projection. 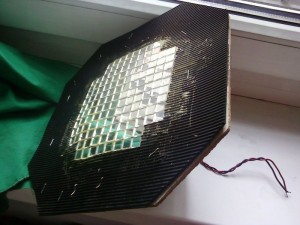 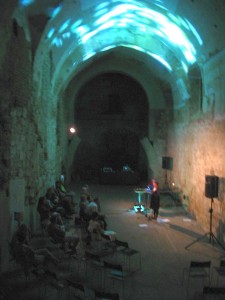 5. The fifth decision was about projection surfaces. The existing urban surfaces would be used (houses), the alternative solutions checked (the water spray screen, the smoke as screen, helium baloons, etc.).

6. The next decision was about the use of visual projections. They would be used as a layered collective canvas – much like the way we use the sounds. Curves, letters (words) and graphics would be used – in all formats & decontructed forms.

During the first tests an aesthetic decision emerged: to run some light sources by sound (or vice-versa). In such case either sound or visuals become purely functional and the usual cultivated artists’ aestethic decisions are less important. The system then defines the artistic output – which is very good principle  since it brings us away from aestethic preconceptions which mainly define the forms and formats.

Technical backgrounds (found on the web):

and some extra for optional use later on:

Below is a little outdated description and images.

For all versions it needs to be noted – never should the laser ray be outputted directly – without being moved faster than 25 Hz. The scanned laser ray is much less dangerous. For lower moving speeds it should be blanked out.

The lasers that we have are combined red and green modules and green pen single lasers. For RGB mixing of colors we’ll have to wait for cheap blue lasers. Until then mixing of RG modules should provide red-to-yellow-to-green colors. Follow -up note: color functionality will not be built in until the effectively functional system is built -> next year.

Five versions are being built:

A pivot with mirror attached to a loudspeaker membrane gives X or Y basic movement – depending of the mechanical asymetric properties of the pivot there is always some vibration in the perpendicular direction. Boštjan Leskovšek built this. 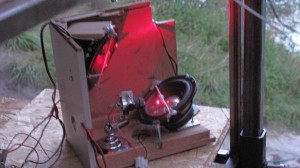 The system needs two perpendicular mirrors attached to loudspeaker membranes. The system can be driven through audio amplifier directly from the individual’s mixing desk/ sound source. This system has a very good time responsiveness/ sinchronicity of graphics to sound and with periodic waveforms (that are “the sound”) – a native circular behaviour. Borut Savski built this. The vertical movement of loudspeaker cone was translated to the deflection (radial) movement with the use of simple half-parallelogram system. It proved strong and efficient but very “diy”. In the example below is a solution with coaxial car loudspeaker and the high tone speaker removed.

Hard-disk motors will be tried out and optical or capacitive closed loop system (this becomes the mark4 then…). 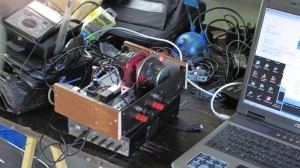 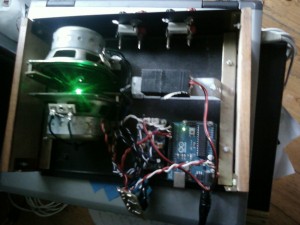 Since Ljudmila’s Luka Frelih built a very nice arduino controlled cd optical focusing pickup, some more thought  will be spent in that direction – also with some form of feedback system. The goal would be to be able to write series of letters (=words…).

Arduino microcontroller could provide the manual potentiometer or some computer/ algoritmic controlled behaviors – for simple graphics. The much smaller and lightweighter deflection system should provide more graphical capabilities.

This is another nice solution found on web. Four mirrors were used at first but proved unsatisfactory. The three mirrors pass the laser light from one to the other. Each mirror is slanted by some small degree – so each creates a circle. A combination of three rotating mirrors leads to a set of symetric circular patterns that are being animated continuously as the relative speed of  mirrors changes. Again it is used with arduino controller which combines computer and manual control. Some simple auto changes can be added to the system with another potentiometer. The system is less good for some efficient dynamic control, since the slope of mirrors can’t be changed while rotating – so the size of graphics is constant. Borut Savski built this – now quite fed up with it. Still, it proved the most stable machine – it never broke down. 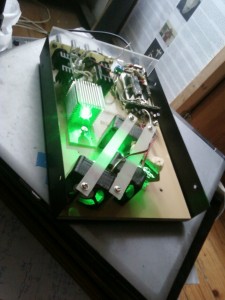 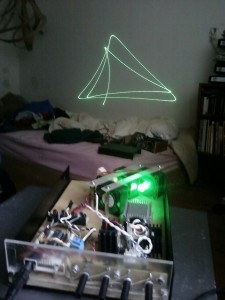 During the year 2011 there were some public events. Here are some pictures. We used the combined light system – not just the lasers. 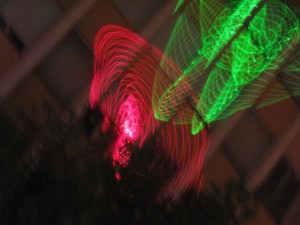 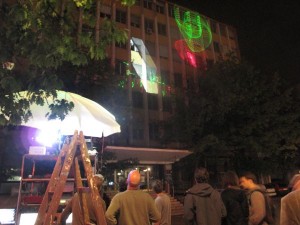 This one uses four loudspeakers arranged in square with two pairs on both diagonals linked electrically in antiphase to provide a symetric push pull action on the corners of a deflecting mirror. A MIDI computer communication with microcontroller is used to make it an advanced vector scanning system. Lars Vaupel and Stefan Doepner built this. The single mirror system is an excellent idea, but with the loudspeakers it lacks the scanning speed – just single letters can be drawn. The system also has a robotic arm system, so it the scanned (pwm modulated) laser ray can be moved about.

This will be built during the months to come. The basic description is here:

Especially good is the diy galvanometers description and electronics schematics for amplifier with capacitive rotation sensors. This “diy” however is not very practical solution since one wishes for ready-made fine-mechanic pieces.

This idea is becoming less and less interesting:

Mark 5. The experimental scanline laser projector will be built on the basis of old cathode-ray-tube vga computer monitor electronics. The electronics has all the drivers for horizontal X and vertical Y control – and for three lasers (RGB). However the speed of horizontal scan and the spead of laser modulation could be too much.

The laser projectors are vector graphics driven by specialized software. They are not left to right & up to down “square logic” scanners. Most softwares use stereo audio outputs for XY deflection and additional data for blanking.