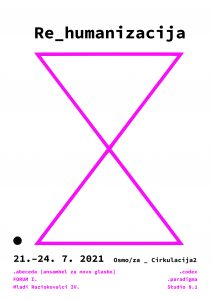 /the opening & closing of the closed dialogue will be accompanied by  an ad hoc spound & vusal ambient in Cirkulacija 2: Simon Svetlik and Borut Savski/

Through communication, the artists engage in ritual thinking to create a ritual of confrontation and understanding of the state of the pandemic and its consequences. The word ritual denotes a sequence of words or gestures with a specific intention to symbolically narrate a new reality. 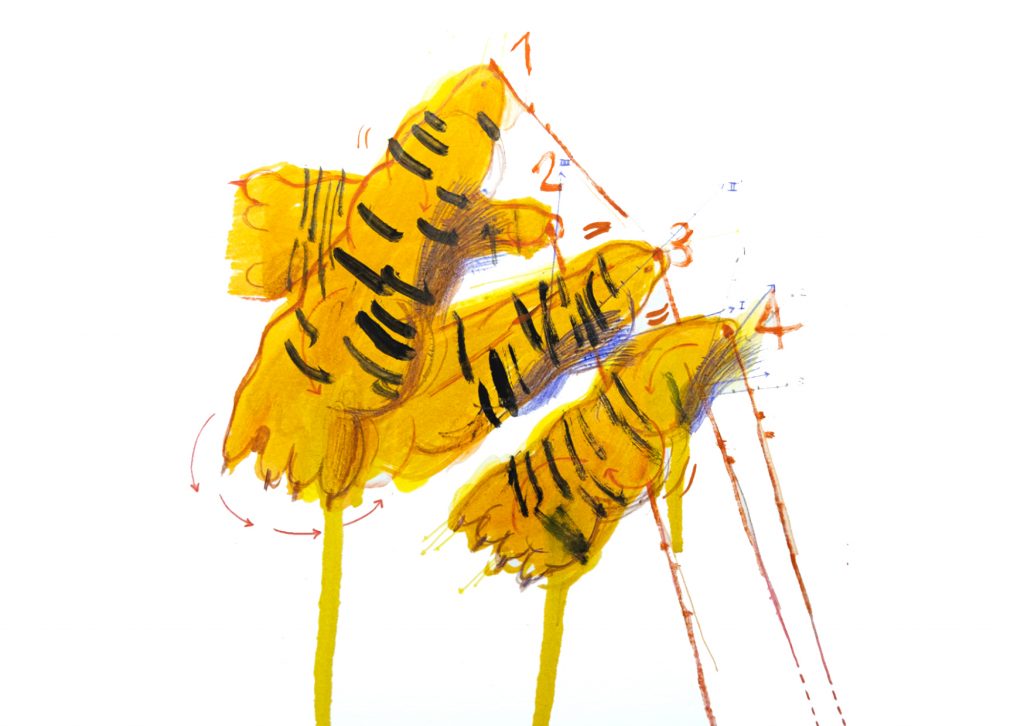 By taking into account the characteristics of the space of Hupa Brajdič Production, the artists create a specific form of exhibit, that is reminiscent of a display / diorama. The word diorama refers to a three-dimensional model (miniature or real size) of landscapes, historical events, natural phenomena, animal habitats, or urban arrangements intended for education or entertainment. It usually consists of a flat or curved painted background in front of which objects are placed. A diorama is an “open box” depicting narrative hypothetical scenes.

Behind the glass portal of the gallery, there is a 24-hour indoor ritual. Using a ritual mindset, the artists analyze the contemporary state of the body. Just like a tiger in a zoo stays wild – it tries to follow its natural principles and blend in with its surroundings – the artists want to approach the space in a non-utilitarian way.
Exploring space not as something useful and closed, but as a space in which we can merge and dissolve. The tiger will remain a tiger as long as he manages to stay part of the jungle, despite of it being fake.

At the event, visitors will be able to actively participate in the development of the performance, which will also be broadcast live on the YouTube platform. On-site and online, they will be able to select four keywords from the list, compose a sentence and share it in a live chat (e.g.: SKIN – STORM – FERTILITY – SOIL = The skin peels off due to the storm and when it falls it fertilizes the Earth). Through their choices, participants will be able to influence the course of events and thus contribute to the creation of the final habitat / layout / diorama.

1.5 + Diorama is the third dialogue in a series of events combined in the 1.5 + project. The first three events were held in collaboration with International Centre of Graphic Arts Švicarija, the Tabor Sports Association and Circulation 2. With the project, the artist connects the visual language with performance and movement, various venues and artistic communities, and the city with nature.

The project is co-financed by the Ministry of Culture of the Republic of Slovenia.
In collaboration with: Hupa Brajdič Production.
Co-producer: Cirkulacija 2

Tatiana Kocmur (1992) is a visual artist who lives and works in Slovenia. In her career she works in the transition from visual to performative art. Since the year 2017 she creates with Liza Šimenc under the name Kresnička (firefly). Besides her own authorial work, she also did organizational and curator’s work (creative apartmenet PRMEJDUŠ, Zelenica gallery). She is the co-founder of the platform TRANSLACIJA/TRASLACIÓN. In the year 2015, she graduated as a painter at The Academy of Fine Arts and Design in Ljubljana. In the year 2020 in the same institution, she graduated from her postgraduate studies of painting with her master piece Telesna instalacija – med performansom in objektom (Body installation – between performance and object). She has also been collaborating in numerous individual and group exhibitions in Slovenia and abroad since 2013. In the year 2021 she is a scholarship holder from the Ministry of culture of the Republic of Slovenia.

Giampaolo Parrilla (1997) is a visual artist living and working in Italy. In 2019, he completed his bachelor studies in Illustration and Comics at the Academy of Fine Arts in Bologna. He is currently completing his postgraduate studies in visual arts at the University of Bologna. He has exhibited his works at various exhibitions in Italy, Slovenia and Uruguay. With his specific artistic language, he also marked the churches of S. Maria delle Grazie (client: Archbishop of Bologna and Cardinal Matteo Maria Zuppi) in Bologna. He has participated in several residency programs and in 2018 received the Premio Casarina Award (Hotel Due Torri Verona in collaboration with the Verona Academy of Fine Arts).