Announcing: Thursday, 19th May 2022 at 20.00 – the opening of a grand group exhibition at Cirkulacija 2, Ajdovščina underpass Ljubljana:

In this exhibition, the first of a series, a common denominator between the participating artists is represented in a symbolic way through a set of art works and the narratives arising from the dialogue between different media (painting, drawing, installation, video, objects, photography, etc) in the exhibition space. The displayed works are charged with an experience and/or a memory of a particular time-place frame which is shared by all exhibitors and evidences itself in the chosen materials, references and themes. It is also present in the conditions of production of the exhibition itself, the curatorial model applied and the institutionality performed.

The aspects of the common denominator are: temporary use of space, a multitude of micro-experiments of self-organisation, and the experience on communal creation of alternative practices. Which must go on. 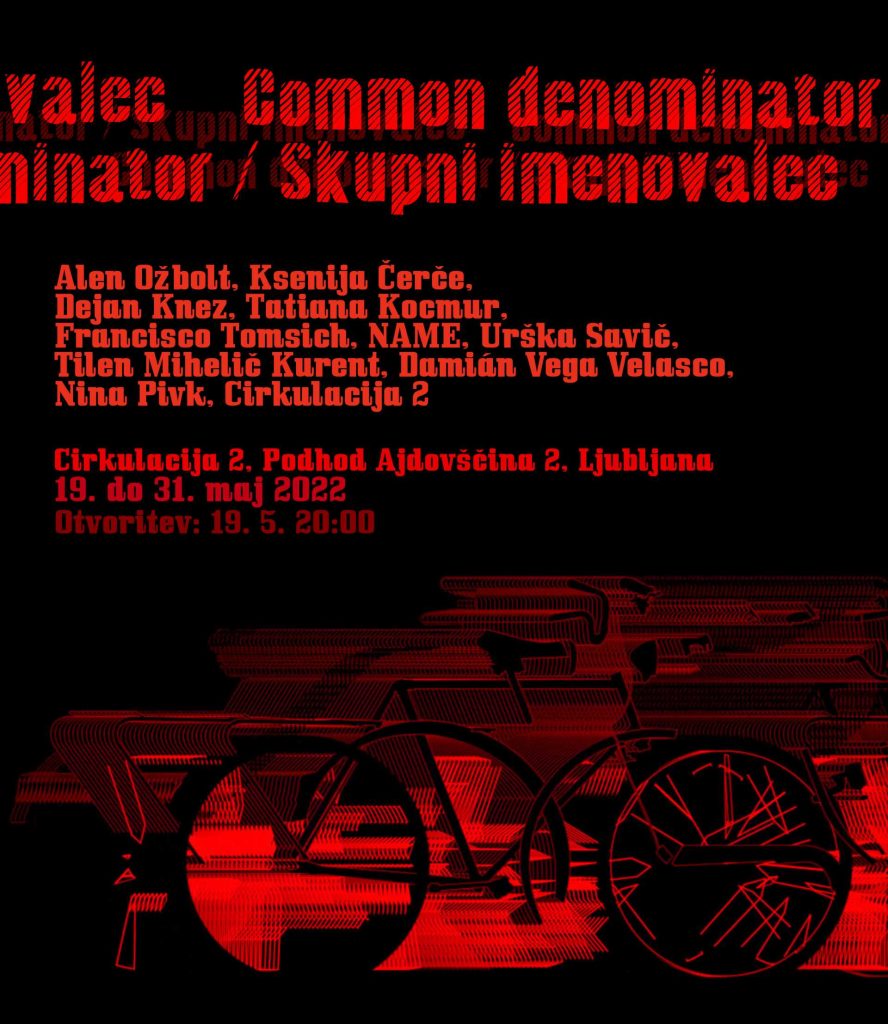 Common denominator is the first of an expanding series of collective multimedia exhibition projects coordinated by Tatiana Kocmur, Borut Savski and Francisco Tomsich dealing with the persistence of Avtonomna Tovarna Rog in art works, bodies, archives and practices and the replication of certain conditions of production which were characteristic of ATROG and determine the general approach to the whole process of exhibition-making.

Exhibition is self-produced by the participants. Wholesome support: Cirkulacija 2 and partners. 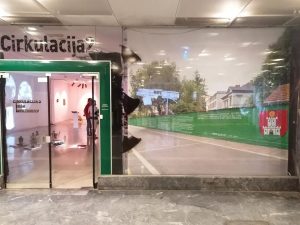 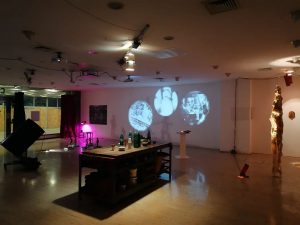 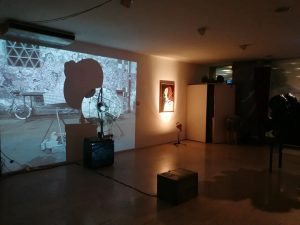 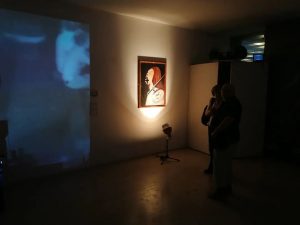 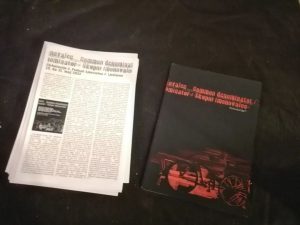 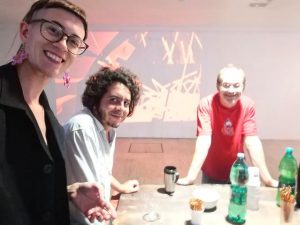 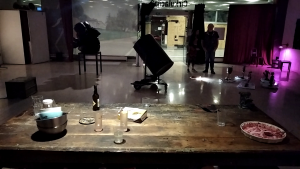 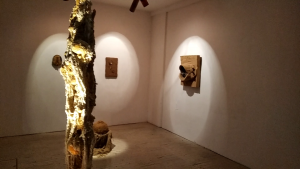 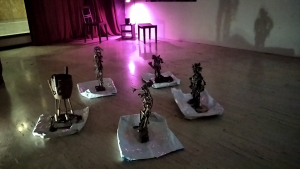 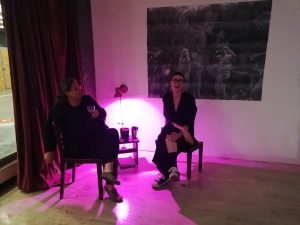 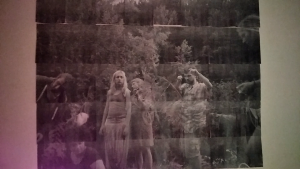 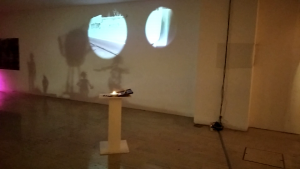 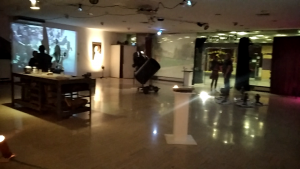 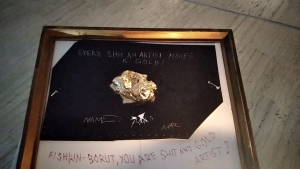 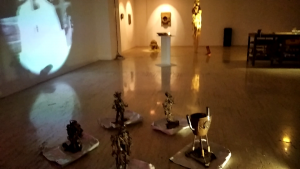 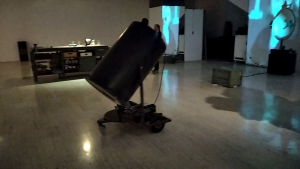 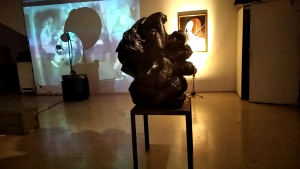 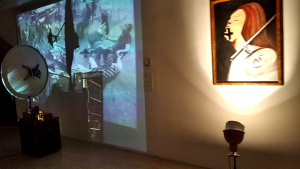 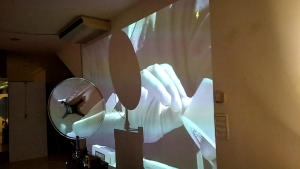 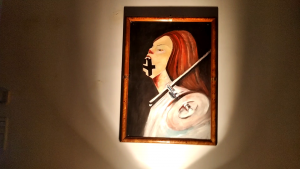 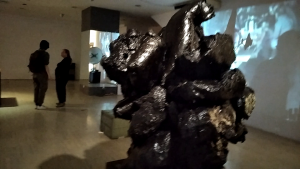 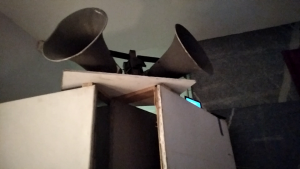 Borut Savski – A contribution to the global madness

What kind of relationships appear when works that are non-coherent by style, by generation, by world historical views – put in one place? Maybe they are even in complete opposition. Can it happen that they do not communicate with each other – or with the visitor?

Here I respond with a reflection in the area of sound – that I am representing for decades already – at the same time I claim that there are ideological (world-view) parallels between different stylistic and aesthetic areas (music, visual arts, performing arts), where one can see that one field of art (conceptually) lags behind – and another leads. So, let’s continue: sounds in space are independent entities that are easily made coherent by an attentive ear. There is never non-coherence or non-communication here – but of course there can be confrontation. Everything else that involves synchronicity / harmony (melody and rhythm …) is a march – or (patriotic?) song … – that we somehow need / even demand. Who knows why (of course I know …).

With this small departure, I argue that other abstractions are also independent entities that coexist easily in space, the binder being the eye (or ear, or brain) of the viewer who assembles the modules into a whole. Moreover, everything that does not allow (= disallows) the intellectual-associative process of a viewer is just a march (or a patriotic song) ….

A small departure from the two mentioned descriptions suggests that entities can be thought of as persons inhabiting a space. If space is not sharply defined / demarcated / limited, then communication between persons / entities are similar: persons simultaneously represent their personal desires / plans, occasionally enter into dialogues, often in confrontations – where personal and interpersonal / communal get well mixed. A homo sapiens is caught in flesh – and therefore inevitably emotional. The view of an outside observer seldom sees in such situations the order or meaning / possibility of development and the solidity of existence. So: chaos and disorder.

Interesting: a few days ago I again came across the word chaos in the primary sense – on the page of the Slovenian Wikipedia, where the word anarchism is defined. Chaos is a basic concept that is the opposition of order. In the late 1970s, it was mathematically represented / visually reduced to beautiful fractal patterns (-> chaos = order!) – and consequently almost disappeared as a basic concept of disorder. Similarly a decade earlier, the random number theory (game theory) had ripped off the concept of unpredictability at the expense of increased probability of achieving the desired result. Game theory was appropriated as mathematical proof for the neoliberal type of economics and the chaos theory as a confirmation for social approaches in the theory of evolution – the social darwinism.

Still,  in parallel, some different ideas emerge: Jacques Attali – Noise: The Political Economy of Music, and a little later Hakim Bey – Pirate Utopias and Temporary Autonomous Zones. Both ideas do not advocate the political anarchism, but suggest the possibility of self-organization of individuals in the communities – outside of the state-capital definitions. There is no longer a quest for the sustainability of the communities thus formed. There are no specific definitions. There are no world ideologies – just different practices.

As temporary autonomous zones, we can name many entities that are self-organized and maintain their vitality over a period of time. Above all, the autonomous zone manifests itself in the liveliness and diversity of the microsocial dynamics: small entrepreneurs, concert halls, students, artists, activists, alcoholics, junkies, sportsmen – in inter-communication & confrontation. It only lasts as long as they are in balance – the ramain as modules / entities. Such temporary autonomous zones are (were): Metelkova, Rog, Tobačna, as well as Cirkulacija 2 – and through many generations even Radio Študent. All very independent hybrids, which are all involved in the given social reality in their own ways, while maintaining the diversity of self-organized, very dynamic internal life – relationships.

It is very necessary that the conventional uniform reality / mainstream flow is opposed by a number of small islands of temporary autonomous zones – as self-organized, anti-bureaucratic, anti-professional, precarious, self-initiated, self-motivated, hyper-productive and completely independent micro-communities. Of course as a completely legitimate and legal part of the wider community. Without the marches and the patriotic songs.