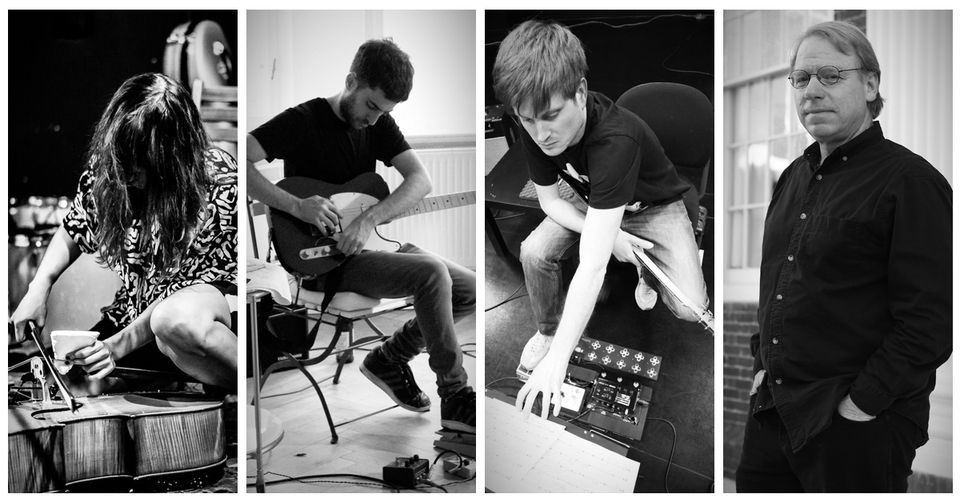 VVU is an Argentinian experimental duo formed in 2018 by Violeta García (expanded amplified cello) and Javier Areal Vélez (prepared electric guitar). This furious and angular, rude and obstinate outfit gives intense and visceral live performances. Their short and concise pieces mesh composition and improvisation, featuring sharp & psychotic thrills, rabid grooves & noisy explosions, in which the sounds of their instruments are distorted beyond recognition with the use of wooden, metal, stone and plastic preparations, as well as an array of electronic processing pedals.

VIOLETA GARCÍA (1990) is a cellist, improviser and composer born in Buenos Aires, Argentina. She is a performer in many art forms, including free improvisation, contemporary and experimental repertoire and collaborations with dancers and others artists. At the moment she is eager to improvise, compose and create new sounds; experiment with extended techniques, prepared instrument and work with dynamic, rhythmic and original tuneful combinations. Her main interest is to open new sound spaces that invite the audience on an inner voyage. / https://violetagarcia.com

JAVIER AREAL VÉLEZ (1985) is a composer, improviser and curator, who performs mostly on electric guitar, with or without objects stuffed between its strings. His musical approach relies heavily on a primal technique that emphasizes timbre and rhythm, avoiding traditional forms in favor of intensity and dynamic contrast. The physicality of his interactions with the guitar create estranged sonic entities that evolve haphazardly outside of specific genres. As an improviser, Javier has performed solo and in collaborations with artists such as Axel Dörner, Akira Sakata, Chris Pitsiokos, Audrey Chen or Andrew Drury. / https://www.javierarealvelez.com.ar

“Primož Sukič is known and established as an excellent interpreter of contemporary works, especially experimental pieces. In his interpretation of Pisaro-Liu’s work, he has combined his experience and delivered the content with the sophisticated ear of a classical guitarist, who is able to transfer his sensitivity and knowledge to the electric guitar, and present it as a subtle instrument which sound is now deeply embedded in the silence and merges with it to create an original sonic event. The organic sounds of rocks and radio waves helped him to make this subtle transition from sonority to silence. The sounds are measured out with consideration and a good measure of the time allotted to them.” – Marina B. Žlender, Odzven

Paris-based Slovenian guitarist PRIMOŽ SUKIČ (1986) studied at the Academy Of Music in Ljubljana, at Akademie für Tonkunst Darmstadt, and at the HoGent Conservatory where he specialized in contemporary performance practice with the ICTUS Ensemble from Brussels. As a performer his main interests are exploring and widening the possibilities of his instruments: both the classical and electric guitar. He is the founding member of the Brussels-based duo The Third Guy, which is constantly researching borders between composition and improvisation. He is highly interested in studying cooking recipes from all over the world, and following latest scientific discoveries in space exploration.

American Wandelweiser composer MICHAEL PISARO-LIU (1961) is known for pieces of long duration with periods of silence. In the past twenty years his work has branched out in many directions, including work with field recording, electronics, improvisation and large ensembles of very different kinds of instrumental constitution. He has performed many of his own works and those of close associates Antoine Beuger, Jürg Frey, Manfred Werder and Kunsu Shim; and works from the experimental tradition, especially John Cage, Christian Wolff and James Tenney.
https://www.wandelweiser.de/michael-pisaro.html

Please note: the composer won’t be present at the performance.

Concert is organised with the support of MOL – Department Of Culture, in cooperation with Cirkulacija²