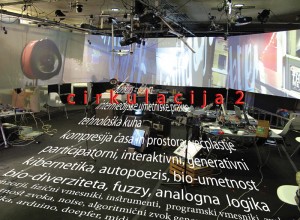 So, one month from the events of expanded (expanded polystyrene=styropor…) Cirkulacija 2 crew at Alkatraz. Time do define some particularites – like participants, time schedule, arrivals, departures, etc. The name so far was Concourse = Discourse, with subtitle: Total event. “Concourse” meaning that we will put out a public call for participation, trying to grab some youngsters, “Discourse” meaning that we are into things being discussed, and the “total event” meaning that the whole thing will go on in multiple layers (preparations, discussions, performances, video and sound recording, broadcasting and streaming, etc…) – going on simultaneously and/or overlapping. It is a social event.

The names of core participants, who will also be asked to present something for the time of exhibition and also fill in the space and time of activities with their projects, objects, systems, performances, presence:

The names of part time participants (so-called performers) – the invited ones: 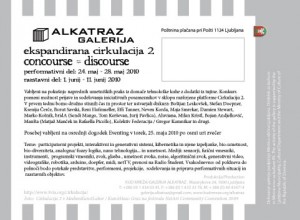 Matjaz Mancek and Raffaella Piccolo (ManRa), Marko Kosnik, BridA (Sendi Mango, Tom Kersevan, Jurij Pavlica), Milan Kristl, Aluviana, Natasa Zivkovic and maybe some more. It is not clear yet to what extent they will be involved.

There will be another level of participants – as the result of a public call that will be put out in public about two weeks before the event. About five people is expected to join in – maybe a couple more. In case they add actively to the event (like public performance of any kind) they can even expect some reward. But mainly public call is meant to get some new people and open possibilities for future collaborations.

So, quite a crowd. The budget available is 4000 eur. At most 300 eur per participant and down to 60 eur for a single person performance. There is no money to produce individual projects from scratch.

The live events take place from May 24th (Monday) to May 28th (Friday).

After that follow two weeks of exhibition. Any kind of systems or
mechanisms or sound and video installations can be presented – as long as the maker is able to put his/her name to it. All of the participants listed are respected artists, so there is no doubt about their qualities. There will be no curator or selector.

The preparation of the platform will take place on Sunday, May 23rd.

On 24th we meet with all the applicants that were selected one week before (with them, there is selection, since they are the “concourse”). We start to define the space and time and the interests – this leads to preparations and collaborations – if needed. In any case – communication. Discourse.

Each participant should have some relatively clear interests – some notions of what to do or present. It shouldn’t be something big or expensive or time or energy consuming. The best is: something that is at the same time the current interest and work of each individual. It is about a process, so it needs not be perfect.

The days will start at around 10 or 11 and will finish well past midnight. But this is not something everybody has to stick. After midnight there will be occasional broadcasts to local Radio Student, hopefully. During the day there will be occasionally making of a documentary movie and each day there will be cooking. This meaning also organizing on the level of providing the food resources – and cleaning afterwards. All this will be open to public. We will not sell food or drinks.

Usually in the evenings we will do the so-called performances and this will be focused and timely defined events. For this reason soon a time schedule will be put out and you will be prompted to fill in the blanks.
The rule here is: the sooner you know and define your time slot – the more secure it will be.

The tuesday (25th May) afternoon and evening is the time for the “big event” – called Eventing – something instead of the opening. For this we will use the outside space in front of the gallery – for public cooking and performing. At some other evenings/days we can also try to protrude a bit out of the gallery – either with persons, sound or video or whatever. We can even try to provide some streaming or video services
to the bands that play during that time at Metelkova places. So: as an idea to fight against isolation.

So, each of the participants should think of his/her focuses and describe it in couple of sentences. Until now I have something from Reni, some ideas from Bostjan and Neven, but I need it in writing. I will open up some open post here (it is a wordpress) – or you can send texts to savski@3via.org

Descriptions will be put on the net with links to everybody.

The main goal of the project is to be able to produce a satisfactory situation for the most people involved. A kind of unique working and creative environment. It is a compression of time and space – so quite a bit of intelligent social behaviour is expected.

There is a large number of people using Pure data as their audio-visual system. Some Arduinos will show up. Video will be strong also. Different sensor systems will be around. There is enough of knowledge around. It should just be allowed to pop up.

The cooks are highly valued and you can apply as one. I expect Stefan, Bostjan and Ksenija will cook this time also. Three more are needed. And some additional help for each meal. We will have a breakfast and one solid meal in the mid afternoon.