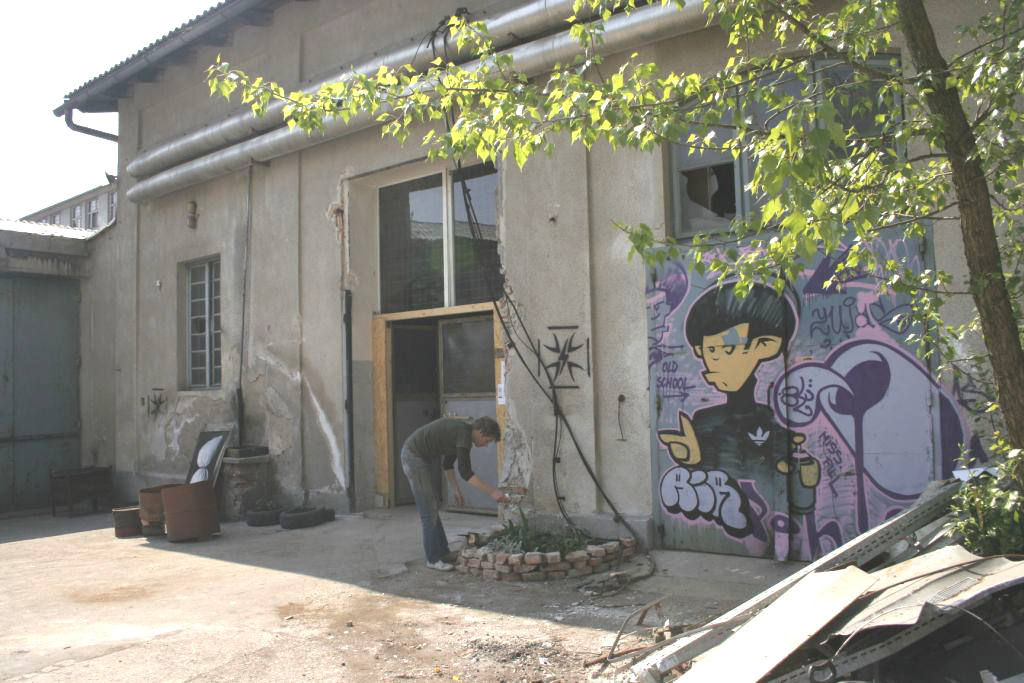 Cirkulacija 2 is an artists’ initiative based in Ljubljana, Slovenia. The name originates from the hall that we are currently squatting – the heating station at former bicycle factory Rog. The name nicely points to the principles that we try to elaborate through our collective work: the principles of evolving our production through series of projects – and try to point out to the procesual nature of artists’ work. We are mainly working in technologic areas, which involves media approaches in art (radio, television, video,…robots, mechanisms, devices,…). And as a glue – the demand for intelligent social behavior. The main core of Cirkulacija 2 are:  Borut Savski, Stefan Doepner and Boštjan Leskovšek 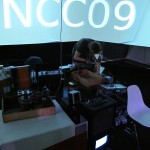 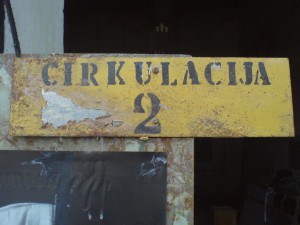 We defined the Cirkulacija 2 as interdisciplinary station allowing us to embrace all the variety of actions that we are able to perform – from the very individual authors’ works to the organization of festivals. We started with public events immediately after squatting – in the beginning of 2007. Since mid of 2009 we are registered as association (NGO), allowing us to apply for public funds and do relatively independent productions. So, another basic definition of Cirkulacija 2 is self-production. In ideal case we prefer to join into co-production relationships with other organizers when performing at public appearances as collective. 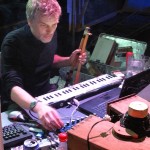 This kind of thought is very close to the so-called tactical media principles – being in a kind of modular structure for quick restructuring – and also to the temporary principles (here is an ideologic link to Hakim Bey). While these ideas flourished as possibilities until some 10 to 15 years ago, now they seem to be forgotten – seemingly consumed by the inability for the pedestrian (the grassroot civic initiatives) to withstand the spreading of the so-called mainstream – also on the level of imposing the civic organizations from the part of international organizations (the EU, the local civic franchises). 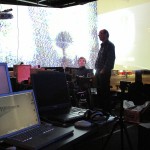 Here I would point out to some of the necessities. First is the protection of the micro social and ideologic environments. I prefer to use the word reservation to define the area that cannot be entered and consumed by the mainstream. This is somehow in opposition to the declaration of so-called open spaces. The second is the necessity to act in public. An alternative to the predominant organizational structures and other forms of human social behaviour is a public experiment. If art is still the field of creativity being alive then the most important aspect nowadays is the creativity in the field of creative human relations. The third is the notion of a collective as cybernetic structure – with the necessity to change through process. 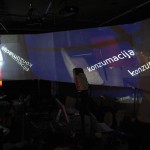 Predefinitions that form ideologic infrastructure should be kept to the bare minimum. Problems and practical rules of behaviour are added as we go along. Also: the expansionist principles should be contained, especially in the form of constructing an institution. One should keep a modular, non-specialist structure and prefer the privately owned property of individual artists to the collectively owned means of artistic production (the institution). Individuals should provide for their personal economies and the collective aspects should be collaborative and handled in the most transparent way. This should be seen as the practice of intelligent social behaviour. And maybe: there should be a clear definition of boundaries – of non-equality between the spaces – a kind of ideologic differentiation between the artists, gallerists / curators, artists’ places, galleries and other places – media included – to get out of the uniform consumer oriented world of service providers. 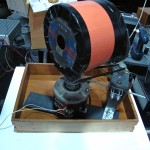 The basic idea about Cirkulacija 2 was to satisfy our basic individual needs for a working space. But even a thought about it seemed almost impossible for individuals due to the scarcity of studios provided by the city officials. The only viable solution was to search for a space for a couple of compatible artists – to have a common workshop and public presentations – a kind of agile artists’ run production situation.

In 2006 Stefan Doepner and Borut Savski made a first search on the many empty industrial spaces, owned at that time by the still fresh private enterpreneurs, some dismantled factories waiting to be sold, real estate companies and banks. There was either no reply or the answer was “we have other ideas”. From the side of city officials there was no reply, but it was clear that the idea of a collectively run space of artists is not in their agenda. In the last couple of years there were some studios built, but they were distributed very loosely among the artists close to city officials, or for younger artists – also for their living purposes.

Three bigger centralized production spaces were open in the last two years, but they must fulfill the day-to-day public service of providing art, dance and music events for the niche citizens. There is another place in plan: the so-called Center for Intermedia at the the same Rog factory where Cirkulacija 2 is situated. It is very hard to think that it will not be built and organized in the centralized manner of providing specific services for the citizens. 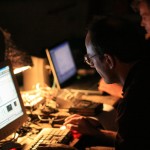 To withstand such centralizing strategies, Cirkulacija 2 stresses the need for real artists’ run spaces, for multiple production centers with clear ideologic and aesthetic strategies. Also with lesser economic dependence from the local power structures – and also with less necessity to survive indefinitely. A kind of positive temporary situation. While the social amplifier lasts.

The artists’ run space should not be a copy of state cultural institution as is the case with the majority of cultural NGO’s coming from the 80’s and 90’s. I would point out also to the very long inertia that has always been the killer of almost any local initiative with original ideas. Usually the transplanted ideas from the West are grasped without much hesitation but they were always very shallow transplantations, so I got an idea that nothing is for real in Slovenia. It’s all on the surface, and behind the scenes there is still the power-play and marriages of the 19th century half-urbanized strong families with some new blood now and then. A game of chess. And this goes also for every cultural institution. There was some disturbances in the 80’s and 90’s but the things have since returned to the old normal. Instead of independent places with their own specific programs the city officials force the places to centralize as providers of space for any type of production. 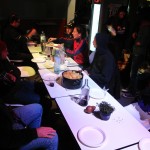 As Cirkulacija 2 we launched a number of so-called “consume” events: The taste of Cirkulacija 2, where we use the very basis of collective behaviour – the eating, basic consuming. There was a series of events entitled like: The Holy Lamb (we prepared a lamb and served it on the table with a video projection of Jesus related iconography), Netart – The hot potato, etc.

The group’s aim is to create a series of dynamically changing, yet progressive, collaborative situations – workshops, laboratory, presentations and discussions where ideas can (e)merge and experiences can be shared. In time of its activities (the synchronization; the compression), we try to generate a micro-community of a non-consume identity. This is the most important aspect and can be described as a socially active position. The non-consume imperative brings forth all the keywords of the moment: do-it-yourself, open source code, creative commons, etc. – all in their broadest sense (like: code = codex…). 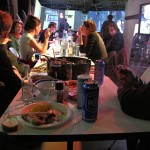 Recently a question was raised – is there a contemporary art scene in Slovenia. A scene as something monolithic and strong. It is strong and numerous, but it is not monolithic. But it provides enough of variety and points of self-reference not to repeat itself. There is a clear difference between generations of 70’s, 80’s and 90’s, also with some of the flashbacks from artists nowadays to the still surviving participants of some past initiatives. However, no direct transplantations of the past are possible or needed. Maybe for ideologic use of rewriting of local art history or filling in the gaps.

Cirkulacija 2 as collective approach is not without predecessors in local or international space. We know them and as individuals have taken part in previous attempts of “social behaviour”. Now it is about continuing – not repeating – and also about not making the same mistakes. It is not about changing the world or hiding away from it – for instance: we want to be connected to public electricity network and not to have to run the expensive electrical generator. It is about adapting a small portion of world – creating an intellectually agile and dynamic human structure that can act as specific social amplifier – if it can and while it can – in the place that we live in. 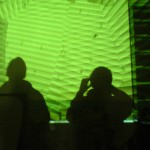 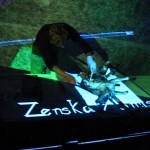 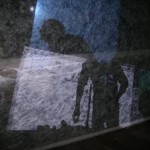 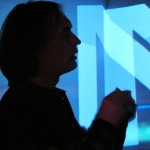 Cirkulacija 2 was established in early 2007 in a squatted place in former
Rog bicycle factory in Ljubljana as a direct result of Intermediate Spaces
festival in Graz (part of Steirischer Herbst festival) and Ljubljana
(Kapelica gallery) organized and produced by Trivia Art Association and ESC gallery in the fall of 2006.

In 2007 we started regular monthly events in Cirkulacija 2 place at Rog
factory.

In the 2008 regular events at Cirkulacija 2 place in Rog on almost weekly
basis.

Special appearances:
– in June 2008: collaboration with sculptor Tomaž Kolarič and the
participants from the Music Academy playing the horns made by Tomaž. A
boat travel on the Ljubljanica river from Špica to the dam at Rog factory with the hornists playing.
– in July 2008: workshops at Sajeta festival of new music.
– August 2008: appearance at Koperground festival in Koper
– September 2008: event in Alkatraz gallery at Metelkova City – part of
Parallel Worlds by Neven Korda – ZANK. 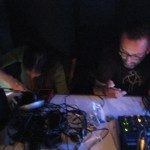 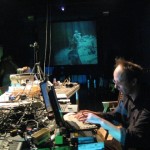 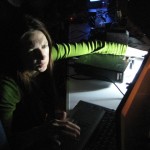 In year 2009 a series of events entitled Prototype 11 were performed –
produced by Trivia Art Association. Prototype 11 series of events introduce the topics of self-organization, self-production, anti-hierarchical social structuring, principles of re-invention, international collaboration and deepening of networking, affirming the broader understanding of “open-source-code”, “do-it-yourself”, “creative-commons” principles and looking into term “techno-progressivism” – as opposed to technofobia and technofilia stands. 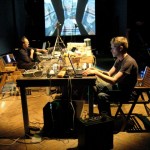 In the following four years’ period – from 2010 to 2013 – we were running a series entitled Total Art Platform  – with so-called platform events performed all over Slovenia and in the vicinity. Many artists participated at these unique events.

In 2013 we started renting a large space at Tobačna Ljubljana former tobacco factory.

or rather: enter the home location http://www.cirkulacija2.org