Audiovisual dialogue 1.5 + The asynchronicity of Tatiana Kocmur and Borut Savski shows two aesthetically autonomous composites and their intertwining / unfolding situation. On the one hand, there is the communication of two bodies, which perform the repetition of simple movements and sounds with certain instruments. On the other hand, there is a computer-generated / perverted image (and sound) that becomes independent of the original – either as an equal partner of the image of both physical bodies, or as an increasingly dominant presence of the mediated – intending to dominate over the physical.

At a time when the physical world is largely shifting to the transmitted / digital world – due to the constraints of a pandemic outbreak – the distances between bodies are increasing, as are the delays / transformations of digital exchanged information. When communicating at a distance, where physical bodies (or several of them) are not present in the same space, the phenomenon of time delay of sound or visual occurs – which is basically a dissociation / dislocation – and it represents the departure from body presence / physicality / coherence of thought -> the physical world.

The synchronicity of the phenomenon / activity and its consequences, which can be sound, image or something else, is seemingly guaranteed in the physical world. When the closeness between the bodies is small and we are talking about physicality – the synchronicity is assured – movement causes sound, the observer follows a coherent image of movement. In transmitted worlds (and especially in so-called digital ones), coherence is lost to varying degrees. The physical body loses connection with its image and / or with its complements. In the transmitted sound and image we speak of latency (delay).

Asynchrony (the opposite of synchronicity) that occurs due to delay is manifested in every step of our perception and communication with the environment (eg: inability to react directly to a given situation, which may be due to inhibition of fear or internalization of etiquette). The current time of physical distance, however, can introduce new forms of asynchrony, as the isolated individual is already a dissociated individual. He/ she is distant from other bodies, which do not return their direct gaze to him / her – in order to provide some returned proofs of  his / her physicality.

In the performance the two artists start with this idea of an isolated subjec. In the desire for closeness, they are searching for potential interlocutors and alternative ways of communication. The physical image of two individuals communicating with their movements and instruments is placed side  by side with their own digital image. The activities in space are mirrored / doubled. The cyclical flow of communication introduces more information into space and creates an asynchronous relationship between the two worlds. The complex relationships between the bodies (or more of them due to the presence of visitors-tubes) and the digital image –  instruments, movements and sounds – question the coherence of the event – the connection between the original and its duplicate is blurred. Two autonomous wholes are formed. 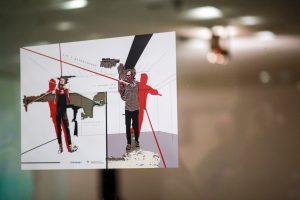 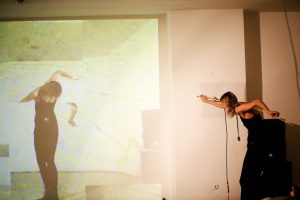 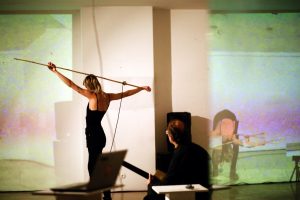 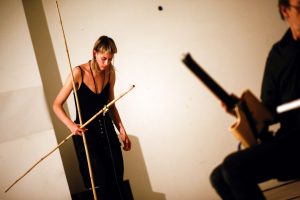 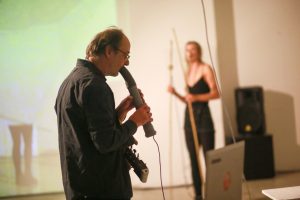 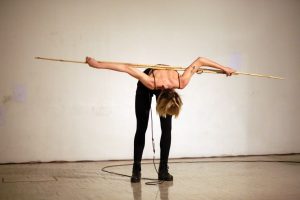 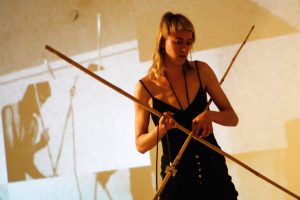 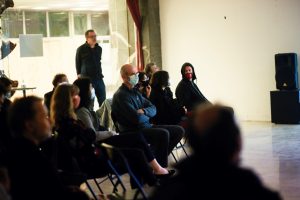 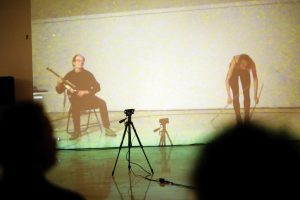 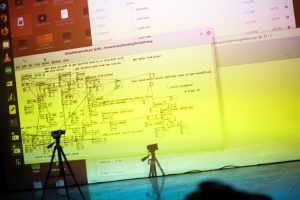 1.5 + Asynchronisity is the second dialogue in a series of events combined in the 1.5 + project. The first two events were held in cooperation with MGLC Switzerland and the Tabor Sports Association. The last will be shown in the space of Hupa Brajdič Produkcije in the Ajdovščina subway. With the project, the artist connects visual language with performativity and movement, various venues and artistic communities, and the city with nature.

Tatiana Kocmur (1992) is a visual artist who lives and works in Slovenia. In her practice, she works on the transition between fine and performing arts. Since 2017, she has been creating with Lisa Šimenc in tandem as Kresnička. In addition to her own work, she did organizational and curatorial work (creative apartment PRMEJDUŠ, Zelenica Gallery). She is a co-founder of the TRANSLACIJA / TRASLACIÓN platform. In 2015, she graduated as a painter at the Academy of Fine Arts and Design in Ljubljana. In 2020, she completed her postgraduate studies in painting at the same institution with her master’s thesis Body Installation – Between Performance and Object. Since 2013, she has participated in various solo and group exhibitions at home and abroad. In 2021, she is a scholarship holder of the Ministry of Culture of the Republic of Slovenia.

Borut Savski (1960) is an intermedia artist who puts great emphasis on sound – while using technical solutions for unusual instruments and autonomous sound and visual structures / sculptures. Closely related to this are the microsocial situations in which he enters and / or creates them. The basic approach is at the level of metaphors – the points where transfers / translations of meanings / motives / motivations take place between different discussion fields. Artistic production is always parallel and intertwined with other fields. Technology, programming, music, view of society. Currently preoccupied with tactile interfaces and interactively generated video / sound / music. Various and numerous collaborations, organizations and co-organizations of events / festivals. He does a lot of work in the Cirkulacija 2 program, where the concept of collaborative research and experimental art and especially post-disciplinary art is sought after.