Tuseday, 3rd October 2017 at 20.30: Intro to OPTOSONICS – introductory presentation and brief historical overview over many forgotten ideas of the conformity of sound and visual patterns. So, again: some media archeology.

Within a short week of time we will work together to construct an art-work/ situation, based on the aesthetics proposed by Klaus Filip. Optosonic principles belong to the so-called media archeology, since the development was boosted especially with the early movie industry’s  demand for synchronicity of sound and picture – hundred years ago. In parallel and immediately after:  the visual patterns were the first choice for sound synthesis and sampling techniques. And also at that time: to generate the abstract sound and visual dynamics, that never repeat themselves… 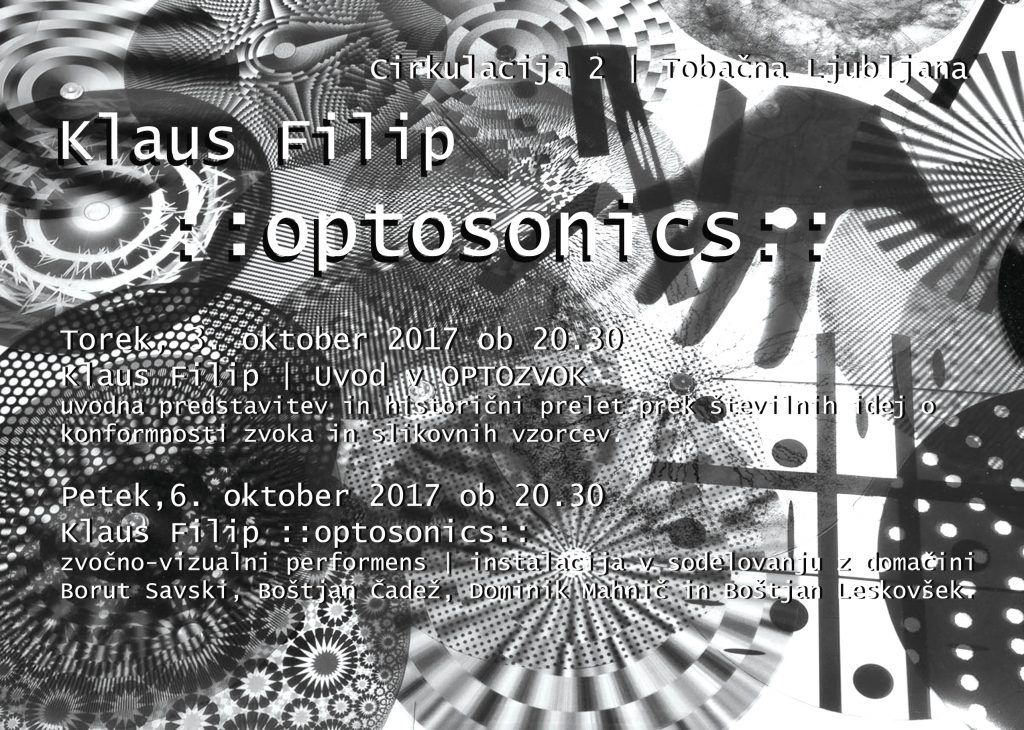 klaus filip & noid: some of our tonewheels

Klaus Filip:
It must have been very exciting, when sound artists discovered optosonics – the synthesis of sound by modulating light – around 1900. The good thing about it is: it is still exciting. Although it was used by commercial film, the technology never made it into common awareness – people still experience it as magic – while radio – which is based on exactly the same technology – is perceived as old-fashioned.

Optosonics is a forgotten technology that was widely in use to store, transmit or manipulate information in the beginning of the 20th century. In fact most early synthesizers were based on optical generated sound.

Have a look into a brief history of optical synthesis by Derek Holzer.

Optosonics can be rediscovered with relish in the age of DIY.

Klaus Filip is a performer/composer/programmer and is maybe the first viennese musician, who used the laptop on stage at around 1993. Study of Musicology and Elektroacoustics (ELAK) at Wofgang Musil at the Universität für Musik und darstellende Kunst Wien.

The main focus of his current work is sinewaves, whose subtle and adducent sounds are used in a wide dynamic range.
As a sound artist he searches to cross sound and light.

Klaus Filip runs a software project called ppooll (formerly known as lloopp) that is a networking collection of a
variety of modules. This freeware is widely used by improvising musicians all over the world.

Teaching position at the university of applied arts, vienna. Steady dispute with the computer as a musical instrument.