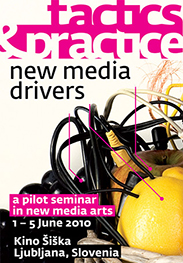 During the pilot seminary on new media by Aksioma, Institute for Contemporary Art, in the first week of June 2010 at Cinema Šiška, Cirkulacija 2 participated with a performence. The crew:  Stefan Doepner, Boštjan Leskovšek, Borut Savski, Ksenija ?er?e.

Surprisingly, a critique appeared that was not just shallow and instant (in Slovene language only):

Friday, 4 June 2010, 21:00 : Cirkulacija 2 will perform an improvised multimedia intervention, perhaps more akin to a concert than a typical Cirkulacija event.

Cirkulacija 2 develops social forms through arts – these should be more structured in the circulating environment, therefore they give precedence to rational approaches. Because the event itself is a real-time improvisation – assembled from different modules, which the performers bring to the event – a conflict emerges between the body (the desire) and the will. These two inertia set up the borders (“create the reality”) and define the field of the event. It is highly unlikely that these borders will be easily crossed and that the intervention could result in any future meaning or pleasure. But that’s precisely one of the purposes of Cirkulacija 2. 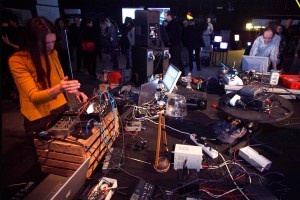