Ronald Gonko suggests:
A simulation with the help of a group of four performative artists or artists from the field of computer art, video art, or computer music composers – and as such involved in a group live performance.

The basic tension of the concept refers to Baudrillard’s text “Simulaker and Simulacija | Simulacra and Simulation” (1981), in which Jean Baudrillard states: “The simulacrum is never that which conceals the truth – it is the truth that conceals its absence. The simulator is real”. The text refers to the question of what reality is – especially in the world of electronic and digital devices – which produce images – “shadows”.

KRAFTWERK (a German electronic pop band) appeared in some of their performances and interviews after the release of the album “Mensch-maschine” (1978) made up as inanimate dolls in order to reduce the importance of their personalities as pop stars to the point of absurdity. 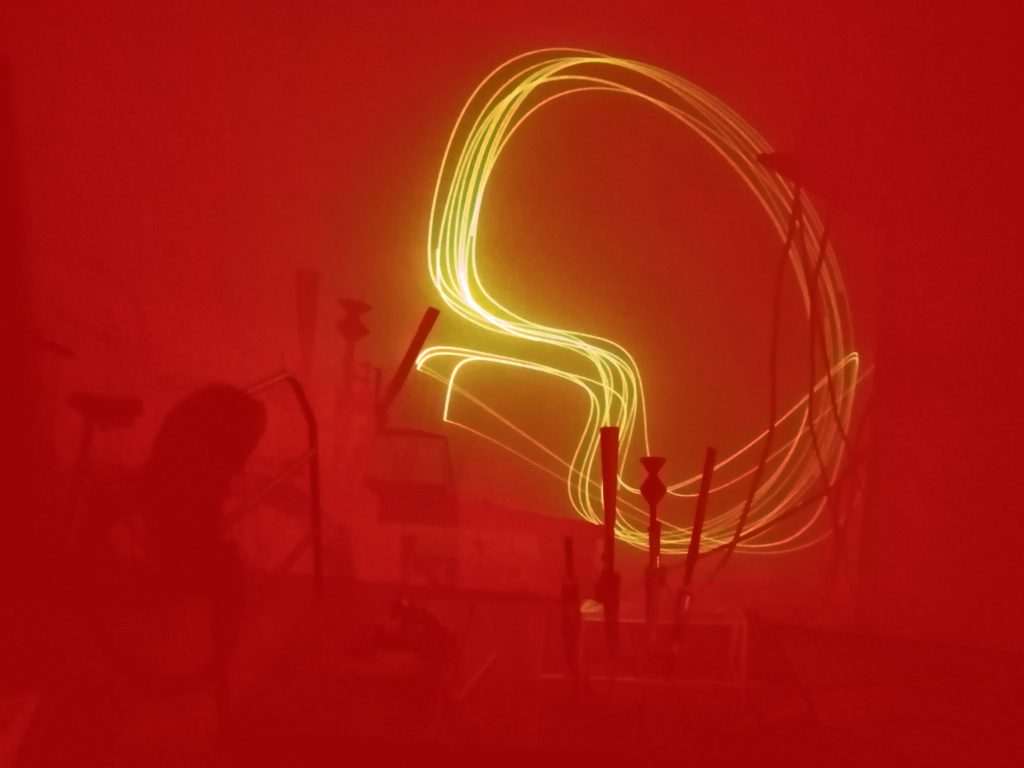 Big Bang refers to big-band, since the author is basically a musician. His basic desire is to gather in one place many musicians who would transcend the currently extremely widespread – but very reduced situation – the practice of experimental solo and duo performances. These are managed as personal artistic expressions. The public presentations of these projects also take the form of artistic (and not musical) presentations. The author questions this practice, because on the other side of extreme individualization there is a segment of humanity called collective identity, which is not only negative, but has wider dimensions in figurative meanings: the individual is only a part of the whole – human belongs to society, human as a social creature. There is a physiological basis – it is called empathy. Belonging to the human species. Civilization is also not a construct of individuality – rather, such an extremely atomized individual (-> tax payer) is a construct of civilization.

Ronald Gonko, as the leader of several numerically strong group music projects, is more than anyone else aware of the possibility of a cohesive collective musical body. He describes the state of mind when such performing body achieves artistic heights. He refers to purely physical and psychological aspects.

The BIG-BANG performance simulation by the “big-band” should therefore be “bigger” than individual – or rather, it should exceed the “greatness” of its constituent parts – the band members. This could also be realized with the addition of live video and light projections from an array of portable computers connected in a cluster using programmed neural networks. Artificial intelligence, which also contributes to “alienation” – if alienation is understood as a deviation of the result from the individual’s action/will. 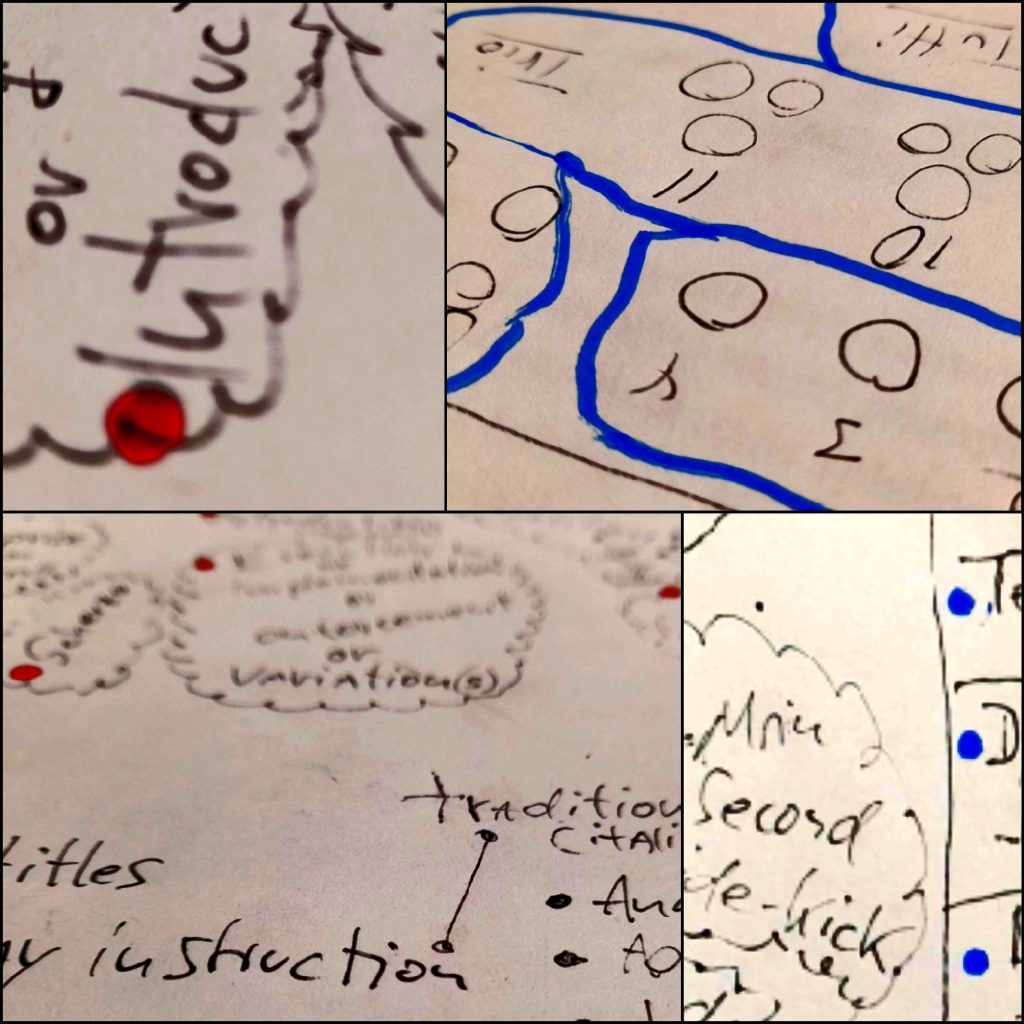 Ronald Gonko is a musician and sound artist from Berlin with an emphasis on eclectic styles. In the form of experimental electronic music Berlin Synthesizer Orchestra, anti-electro Stop Disco Mafia – and to acoustic expressions in bands like Kapaikos (Polka-Punk, PP) and Mariahilff (obscure singer-songwriter stuff). In solo performances, he explores the boundaries between a serious artistic approach and a no-nonsense neo-dada sound using audio signal processing devices, lo-fi electronics, found sound artefacts/ soundscapes – and pots, pans and hat-like gongs. In group performances, he works differently: regardless of the style, he prefers the high training of the group, because this is the only way a moment of collective consciousness occurs – at the expense of the individual unconscious.
https://soundcloud.com/rgonko

Stefan Doepner, born in 1966 in Bremen (Germany). Studied fine arts and interactive television at the Fine Arts Academy in Bremen (1991/1996). Among other things, he is the co-founder of the f18 institute (1996), KUD Obrat (2006, Ljubljana) and Cirkulacija 2 (2007, Ljubljana). References include sound design for Stelarc – Motion Prosthesis and Exoskeleton, 1998 – 2014; since 2012 he has been a member of the music group 300,000 V.K., musical accompaniment for the play Black magic – White technique by V. Repnik, I. Štromajer, R. Klančnik at EPK Velenje; participation in the project Platform for Total Art; international mini-festival Cirkulacija 2: The sound of the organism – the organism of sound in the Aksioma gallery; participation in the Speculum Artium 2013 festival, DDT Trbovlje; 2014 Jedinica_Jedan vol.2, and 300,000 V.K. Installation, group exhibition Kozmos, City Gallery, Ljubljana; hosting Steirischer Herbst 2017 as part of the project “The Sound of the Internet of Things”. In 2019, participation in the project Cirkulacija 2: Cacophony-cacovision in Osmoza Ljubljana. Etc.
http://www.f18institut.org/

Borut Savski, born in 1960 in Ljubljana, is an intermedia artist, composer and producer who places great emphasis on sound – while simultaneously using technical solutions for unusual instruments and autonomous sound and visual structures/sculptures. Closely related to this are the microsocial situations he enters and/or creates. Between 1979 and 1984 he studied electronics at the Faculty of Electrical Engineering. Between 1993 and 1997, he worked regularly at Radio Študent as the head of program organization and implementation. After 1997, administrator of the Ministry of Experiment initiative at Radio Študent, established for research and use of new media. Self-employed in culture since 2004. Various and numerous collaborations, organizations and co-organizations of events/festivals. He works a lot in the Circulation 2 program, where the concept of collaborative research and experimental art and especially post-disciplinary art is implemented – when artists sovereignly intervene and associate all spheres of art and in a socially engaged situation.
http://www.ljudmila.org/~savskib/