John Duncan: The title of the mix I’ve prepared for the concert is titled MASSIVE, running about 20 minutes.

Before the concert also on airwaves of  Radio Študent Ljubljana – monday at 23.00! Hosts: Urška Savič and Borut Savski.

https://radiostudent.si/kultura/r-a-d-a-r/oblike-bodocega-misljenja
Interview with John Duncan and composition for radio-waves and vocal: The Shape of Minds to Come. The title is a paraphrase of the usually more positive  “the shape of things to come” – a more optimistic belief on the future -> “new=better”. The paraphrase points to the contrary. 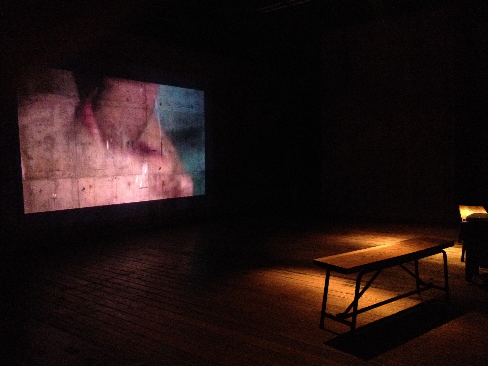 The installation VAMPIRE RELIEF is another comment on the social situation. A wooden sharpened pole, fixed to the floor, a ladder for ease of access and an engraved board with a list of selected social negativities – a suggestion.

The concert will also be streamed live on the net.

John Duncan (Wichita, Kansas 1953) is American artist, studied with Allan Kaprow (who launched the word “happening”). Worked in Los Angeles, Tokyo, Amsterdam, currently in Bologna Italy. His areas are performance/ actionism, instalations, contemporary music, video and experimental film. His events are  a constant research into basic existential phenomena – controverse and often brutally direct. This is the third visit of John Duncan at Cirkulacija 2.

BITTER EARTH (2016), THERE MUST BE A WAY ACROSS THIS RIVER (2010 with Michael Esposito), The NAZCA TRANSMISSIONS (2009), NINE SUGGESTIONS(2005 with Mika Vainio and Ilpo Väisänen), PHANTOM BROADCAST (2004), THE KEENING TOWERS (2003), FRESH (2002 with Zeitkratzer), PALACE of MIND (2001 with Giuliana Stefani), TAP INTERNAL (2000), THE CRACKLING (1996 with Max Springer) and RIOT (1984) are all considered by critics and composers alike to be benchmarks in the field of experimental sound and contemporary music.

His audio work has been released by Allquestions, iDEAL, Vinyl-On-Demand, Fragment Factory, Tourette, Sub Rosa, Touch and Ash International. Recent LP releases include BITTER EARTH (2016), EMS Sessions Vol. 1 (2016), YEAH (2014 with Jim O’Rourke, Oren Ambarchi and Joe Talia), The BLACK ALBUM (2014 with Masami Akita), THERE MUST BE A WAY ACROSS THIS RIVER/the abject (2011 with Michael Esposito and Z’EV), The NAZCA TRANSMISSIONS (2009), two 5-LP box sets of early recordings (2006 and 2012).

Duncan’s events and installations have been held at Narkissos Contemporary Art Gallery in Bologna, Antumnbrae Intermedia in Austin, Flight Gallery in San Antonio, Nicodim Gallery in Los Angeles and Bucharest, Flussi 2015 in Avellino, Immerson7 and Mutek in Montreal, ZKM in Karlsruhe, Gallery Mario Mazzoli, Peninsula Dotland, Mindpirates, Liebig12 and NK in Berlin, The Hermann Nitsch Museum in Austria, Fylkingen, Färgfabriken and Gallery Niklas Belenius in Stockholm, Performa, Gallery Michele Maccarone and PS1 in New York, Rod Bianco Gallery in Oslo, The Institute of Contemporary Art (ICA) in Boston, the NoorlandsOperan in Umeå, Instants Chavires and l’Echangeur in Paris, Le Lieu Unique (with Giuliana Stefani, Leif Elggren and Carl Michael von Hausswolff) and Cable# in Nantes, L’Audible (with Nico Vascellari) in Lyon, The Lausanne Underground Film Festival (solo and with Bryan Lewis Saunders), Fondazione Antonio Ratti in Como, Palazzo Appiani for PX2 in Piombino, the IPCA Ecomuseum (with Valerio Tricoli) for Eco e Narciso in the province of Turin, Teatro Piccolo Jovinelli in Rome, AngelicA (directing Ensemble Phoenix Basel), Raum (solo and with Ursula Scherrer) and Netmage 07 (with Leif Elggren) in Bologna, MainOFF in Palermo, Gallery Enrico Fornello (with CM von Hausswolff) in Prato, Cut and Splice (with CM von Hausswolff), [no signal], Beaconsfield (with LAFMS) and The Church of St. Giles Cripplegate (with Alfredo Costa Monteiro) in London, The Getty Center, Black Box, The Box, MOCA and KPFK in Los Angeles, ORF Kunstradio and MAK in Vienna, Ars Electronica in Linz, CCA in Kitakyushu, and the 2nd Gothenburg Biennial. He has performed with and directed Ensemble Phoenix (in Basel and Bern, as well as for the AngelicA Festival in Bologna), Musica Nova in Tel Aviv, Zeitkratzer in Berlin and Coro Arcanto again for AngelicA in Bologna.