Robotanica/ subtitled Genesis is an exhibition / performative situation running intensely from 23rd May to 8th June 2017 at Cirkulacija 2 in Tobačna Ljubljana.  Exhibition is also a festivity of 10 years of Cirkulacija 2 initiative activities. 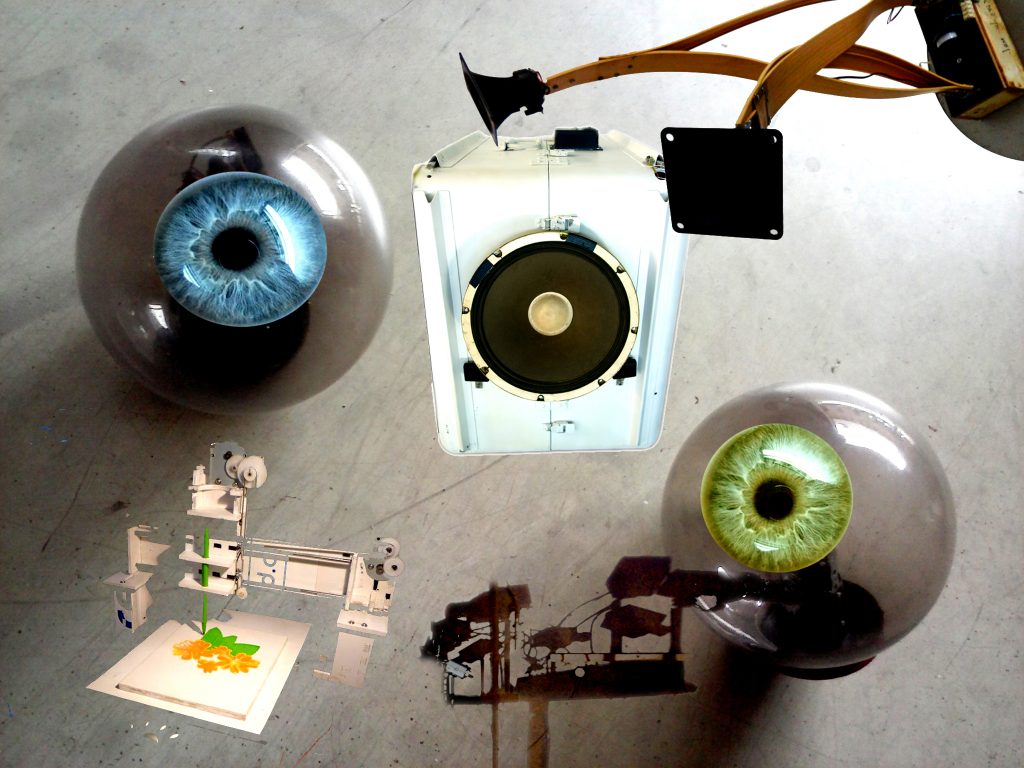 Robotanica project is a special exhibition and events approach that we’ve been developing in the last year. In 2016 we performed twice under the title of Robotanical Garden (Velenje/ Slovenia and in Trieste/ Italy). The two occasions were the testing grounds for the new principle, that is now expanded and multiplied by invited artists and additional objects and principles. The introductory performences confirmed that the concept of exhibition is extremely communicative for the visitors and their responses were very good.

The Genesis subtitle introduces the biblical allegory and adds the mythology of the beginning and the end of the world. Genesis is of course the birth of the World.

The basic attribute of Robotanica approach is “the view from below”, meaning that the devices themselves are the main actuators (actors) of the situation, which encompasses move, light and sound. This views are multiplied by the projections to the four corners of the world/ walls – creating predominantly a space of devices – a kind of contemporary Garden of Eden where a Human might only be a visitor – an object in the projection. Not a catastrophic image of modern world – on the contrary!

The presentation form is a 14-day exhibition/ installation of objects, media and principles that coexist in space. All objects/ principles show some measure of autonomy  in their domains of behavior. It can be the result of coincidence, random algorithm, or interactive or generative behavior. The cacophony of cross-related inter-influencing might be the chirping of the birds of paradise. Or the terrifying roaring coming from the dark forest…

The majority of objects, principles are provided and developed by the resident artists. This represents the backbone of the exhibition. So, the exhibition is also a kind of overview of the ten years of production by some of the artists participating at Cirkulacija 2 events.

In the time of exhibition the guest arrive and depart one after another – adding their objects and approaches, and taking them back home. Thus the exhibition park of devices constantly varies and the exhibition has multiple peaks.

We invited extremely dedicated international artists : Karl Heinz Jeron (DE/ Berlin), Ewa Justka (Poland/GB/London), Adam Donovan (Australia /  Zűrich) and Lars Vaupel (DE/ Hamburg), that have greeted the possibilities of Robotanica exhibition concept. Especially the younger artists invited are at the peak of their activities, while the matures are estebleshed as for-runners of cybernetic arts. This should keep some distance to the usual trendy-hype approaches. The artists will provide their moving objects / devices, simple or complex robotized installations, simple audio-video synthesizers, electromagnetic receivers, scanners, etc.

Poland/ GB/ London. Electronic music, noise, sound art, musician. Currently in London on master’s degree studies of computer arts at Goldsmiths College. Self-taught builderof electronic sound instruments – an important part of her artistic work. Her area of work is based on reasearch of materiality of objects, the nature of their vibration (human body, body of plants’ bodies, electronic circuits, the changes of their macro and micro locations and relations between the former and latter). Explores the principles of quasi-direct influencing/ sensing. All this is presented at her live performances, interactive installations, in her DIY electronics, etc. In art she tries to sense the concept of the materiality of the hidden, she says. She performed at festivals: Loop Festival, Sonic Acts Academy, Supernormal Festival, Club Transmediale, STEIM, Colour out of Space, Beam Festival, Cafe Oto, etc. In 2015 she appeared at Kiblix festivalin Maribor.
http://ewajustka.tumblr.com/ 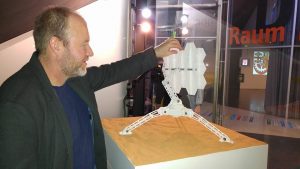 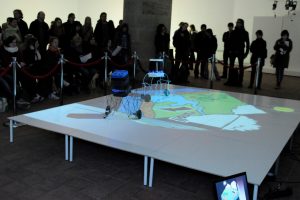 Project’s metaphors
The concept of devices is expanded to the “principles”, which encompasses also non-material (“less material”) forms of actuators: electromagnetic waves/ cosmic ray activity, changes in temperature, sound and light sensing, sensing of the earth magnetic field, non-linear electronic and software decisions and transformations/ perturbations. All these are actors, that will be included and either add the view from below, or even the view from above.

On one side this duality of views has to do with intelligence, culture, civilization, the overview of the whole, as with overseer, control – mostly a restrictive/ prohibiting category. The other side is the view of the individual, in machines often realized with a webcam (video-view), or with sound or other form of data/ signals. This represents the sensing from below – in our case we promote it as area of individuality, coincidence – the personal freedom. Metaphor with human sociaety is clear. The intermediate space suggests the reality: spanned between ideas of the open and the closed.

In artistic practices both principles are superimposed as order and chaos, as classical form or open form. Our field of interest is not allegory of any of the two radical positions, but coexistence of both coordinates. The space opens up only with both determinants present. Not a situation without conflicts!

Practical implementations of “actors”
As described, the meaning of devices / principles is not anymore that they provide some immediate function for us (tools), but are liberated entities. Actors/ actuators can be “natural” (light, temperature, electro-magnetic field), but are always transferred/ transformed/ changed – in linear or non-linear fashion – digitally or analogue. They can even be computer programs, meaning that they appear/ sustain themselves in the form of logic language. In this case it is again the language bringing the meaning/ motivation/ movement. Of course, it is a derivation of the human language. A biblical metaphor: “In the beginning was the Word, and the Word was with God” (Genesis).

Robotanica: Genesis project has an active development phase being performed on the devices “from below”, and also on the devices “from above”. The below devices are in the domain of their authors, while the above devices  (“the ones determining the limits; prohibitions”) are the matter of agreement. The central control can be some of these:
a.) central eye (usually video camera),
b.) a matrix of beakons mapping the space (usually IR lighthouses),
interesting would be also to check
c.) the intelligence of a swarm, where the actors organize themselves by sensing the most immediate colleagues – and adapt (self-organization; can be possible with RFID). A very simple protocol should be used.