Output sound and visual modules were the focus in 2014, as part of Cirkulacija 2 – The Noise is Us: Space Time festival. In 2015 we have further elaborated the outputs and will extend them with the use of mechanical resonators, with some focus on the nature of materials, that add specifics to sound and visuals. Sound sources that do not use loudspeakers, light sources that do not use video projectors. Dynamics produced by motorized mechanics by scratching, hitting, movement, change of light aperture.

You do what your interface wants you to do (paraphrase of: you are what you eat…)

The interface determines what you do. A different interface makes you do things in a different way. The types of input interfaces are usually tactile (moving, rotating, lately touch), rarely aetheric (in the air), and very rarely as a whole body immersion in the control matrix (“cockpit”). In spite of using the word control, we will not forget about random (or autonomous, generative) principles – even more: when an input-output interface with it’s specific mechanical geometry defines its own dynamics of patterns, we will happily include them in the cybernetic system.

Some interface projects in preparation

a hand palm fitting wooden or acrylic sphere, inside a tri-axis angular rate sensor (gyro), a tri-axis accelerometer and a tri-axis compass for motion interface functions. Further on a wireless data transmitter/receiver and a battery are built in. The second part of the interface is a arduino based receiver for the wireless transferred signals.

The midiSpheres are primarily designed as control interfaces for our 8-channel robotic audio system but thanks to their wide spread protocol can be used for a wide range of applications like synthesizers, sequencers and other midi controlled electronics.

a small wooden box with ca. 9 registers – movable wooden sticks, each attached to a slide control – with a finger tip pressure interface. 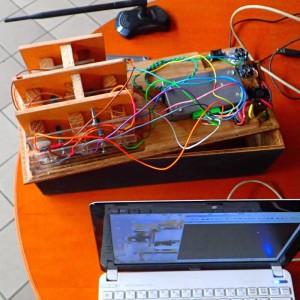 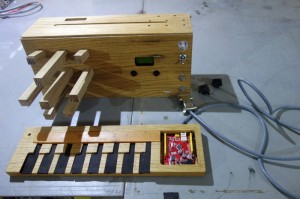 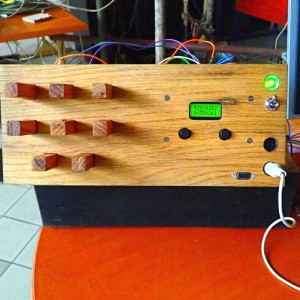 The midiRegister has been conceived as an analog/digital converter interface for audio, video and motion systems